Ongoing Issues with Backup and Scheduling on FiveM AMP Instances

I wanted to bring to your attention an ongoing issue that we, as a community,
have been facing with creating backups on our instances.
We have been experiencing issues where backups are not working at all and, when they do, they break the integrity of internal files, causing a lot of downtime and frustration.

Scheduled Backups Don’t Work?! Recently, I had a lot of issues regarding backups… Bungeecord Instance Issues When Using Bungeecord Instances, after taking a backup the server won’t start even tho its Scheduled to do so, here’s the workflow: [image] I have no idea why it won’t start the server… after the backup is complete FiveM Instance Issues On Fivem Instsness the backup doesn’t work simply… Here’s the workflow: [image] It does trigger it, but it won’t actually take a backup Syst…

Furthermore, the scheduling system for backups seems to be malfunctioning, causing AMP to fail completely.
We have also been experiencing issues with updating the instance, sometimes resulting in errors.

Having the same issue here. Same environment too, fresh Ubuntu 20 and AMP install.

It is clear that these issues are not unique to our server, as they have been reported multiple times on this forum by other users.

The FiveM template can use some updates, its very buggy and doesn’t work properly You can’t backup the server it simply doesn’t work no matter how hard you try even forcing it won’t help logging issues (console blank, console not updating, console lagging) it’s happening all the time if the server is empty or online 24/7 You can’t change the sets PoweredBy "AMP by CubeCoders - https://cubecoders.com/AMP" there is a config issue, and it will not update the user.cfg…

Also to make the issue more frustrating, the logs are complicity empty because AMP thinks that the backup was successful…

I have a suspicion that it may not be possible to backup a FiveM server while it’s running, it may be holding open file locks everywhere which makes it difficult to manage. In many ways it’s a very poorly put together server that is difficult to wrangle into something AMP can handle.

The PoweredBy tag is part of an agreement with the FiveM developers and will not be removed. Normally they do not allow automated tools to set up and manage FiveM servers but we were able to negotiate an exemption.

yep, The FiveM community is not the best to work with, the issue is that even if the server is offline and the backup doesn’t work.
honestly, the most important files to backup are the resources folders and CFG files, as most data is stored on the database

A solution to this issue would be to implement a backup system that allows users to select which CFG files to backup, up and also includes the resources folder.

also, this is currently an urgent matter as FiveM instances are not functioning due to changes made by the FiveM dev team.

Having the same issue here. Same environment too, fresh Ubuntu 20 and AMP install.

What are those changes exactly? I don’t play the game so I’m not really on top of what it needs.

I am also not sure, but they changed the repository for updates 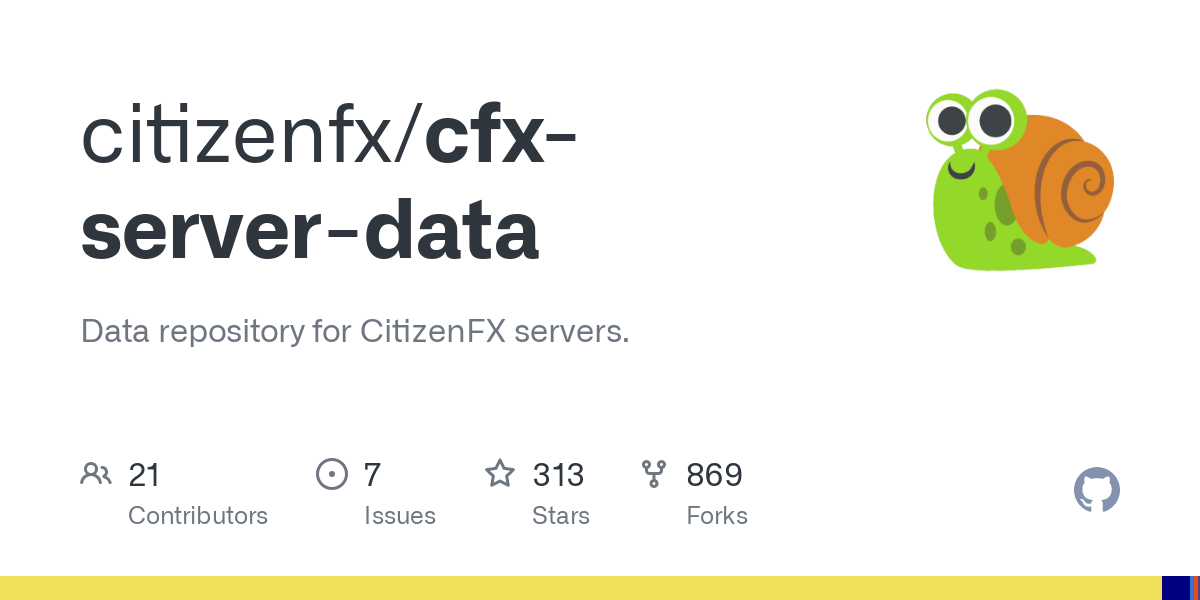 Data repository for CitizenFX servers. Contribute to citizenfx/cfx-server-data development by creating an account on GitHub.

not sure why… the server files are located in

so this means that we need to pull from a different place?.. not sure how AMP FiveM Instance works with updates

I’ve tracked down the issue - their API endpoint for Linux update information is returning no data:

The Windows data is just fine though…

It’s possible they may be trying to deliberately make it harder to allow automated updates. Frankly I’m close to dropping support for FiveM and advising people to switch over to AltV instead because of how hostile the FiveM guys are (despite the informal agreement I have with the devs)

They’ve moved to a new URL but didn’t document it. I’ve managed to figure out the new URL and have made the change to accommodate this. CI and Nightly will have a fix soon, mainline will update later this week.

FiveM is a popular community-maintained project, but it is primarily run by a group of 15-25 year-olds.
Despite its success, certain aspects of the project have been neglected and the welcoming, open-source community atmosphere has dissipated.

The maintainers have been known to arbitrarily close pull requests, and there is no security or contribution policy in place.

Despite these issues, it is important to continue supporting the AMP FiveM Instance, as it may be Very difficult to find an alternative.

It should be supported until it is no longer feasible, whether that be through the closure of cfx.re or drastic changes to the update and API processes.

we (you) cloud open-source the AMP instance for FiveM, and if changes like this one arise again we as a community can maintain it

Reading this, not sure if my suggestion

we (you) cloud open-source the AMP instance for FiveM, and if changes like this one arise again we as a community can maintain it

The agreement I have with the FiveM devs to allow AMP to deploy it automatically doesn’t allow for the module to be open sourced, as that would allow someone to bypass the check that prevents it from running under Enterprise installations. The agreement is only possible because I have decent control over who can and can’t use the FiveM module.

So if it becomes unmaintainable there may be very few options, short of disabling the ability to perform automatic updates, requiring that the user provide the files.

Thanks Mike for tolerating this situation and working through it i will test it tonight.