Problem Description:
I have been trying to use the Cloud Backups function but I can’t seem to get it working. I keep getting the same error every time:

Have you got the URL correct?

I’m also getting this error. I thought it would be best to add here instead of creating a whole new thread.

Have you checked the logs for the AMP instance you’re doing this on?

Adding my name to this issue. The URL is correct (s3.us-west-004.backblazeb2.com), I’ve tried it with and without the https. Debug logs provide no helpful information, just
[15:40:52] [RunningTasksManager:yamikaitou Debug] : Task Uploading Backup to S3 (Scheduled Backup) ended: Acknowledged.

One thing I see in B2’s guide is about the signature needing to be v4 instead of v2, not sure what AMP is using

AMP is using the official Amazon S3 libraries, it may be worth checking if Amazons own S3 command line tools are able to connect.

Will try the CLI, but tried using AMP again with AWS S3 and it worked

Using the AWS CLI, I am able to successfully upload to Backblaze

And show me the config page in AMP?

I get the same results as YamiKaitou from my tests. MinIO is Amazon S3 v2 and v4 compatible, so it should work from what I understand. 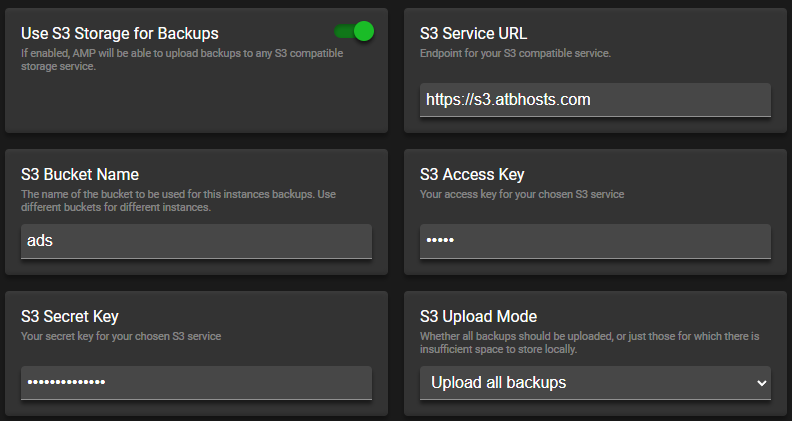 Looks like not all S3 providers support the standard list of ACLs that Amazon do, so I’ve changed it for the next update.

Using the exact same config/setup as Atifex here.
TrueNAS Scale S3 via MinIO, verified S3 is accessible via WebUI and S3 Browser.
Running into the same error: “This task could not be completed: Uploading Backup to S3 - - State: 3.”

Good morning (or afternoon) everyone.

New AMP User here, but I wanted to chime in on what I’ve been able to accomplish towards getting MinIO working with AMP. My set up below is now working fine but there will be more to come.

And thank you to the people testing and posting as well as Mike for updating AMP to help the situation.

I’ve tested on two platforms, and managed to get one working.

As it turns out, the latter DNS style is working just fine. It just took some configuration. Here’s my set up for those curious.

For now I’m on the Synology using Docker b/c it was easier than dealing with Kubernetes / Traefik, but I do plan to attempt to move the setup back to TrueNAS as we’re getting rid of the Synology eventually.

The MINIO_DOMAIN enables the DNS style routing. That and the wildcard DNS entry is the key to make it work.

I created a user in MinIO called amp and assigned the “readwrite” policy. I then created a service account for that user. I then created a bucket. By default in MinIO, the bucket I created now has access to all buckets in unless the bucket has special permissions assigned. Note that my buckets are still set to “private”.

And that’s it. MinIO is working perfectly.

My future plan is to move this set up to TrueNAS SCALE, possibly using SSL but we use an internal CA so that might get messy. (AMP’s docker container probably won’t recognize my internal CA without me adding the CA certificates and I’m not sure that’s possible yet for a containerized game server set up like I’m running)

Thanks for reading and I hope this helps others get their MinIO set up working.

Quick Update, I was able to get this working on TrueNAS SCALE.

If anyone else is interested and needs help getting theirs set up just let me know. I’m happy to share config files, I just didn’t want to spam this post.

do you lose access to web console after redirecting ? im now unable to login via the web console but s3 backups work via amp

Edit: apparently the docker container was not resolving the dns name i must have missed that now it is fixed , thanks for your guide it helped alot

Glad to hear it helped!

I learned a lot about S3 buckets that day. lol