Problem Description: I can’t seem to get Satisfactory running.

On the instances screen, it says Running.
Click ‘Manage’, and it says ‘Application State: Stopped’
If I click either Start or Update on that screen, then check the console, I get this: Error! App ‘1690800’ state is 0x202 after update job. 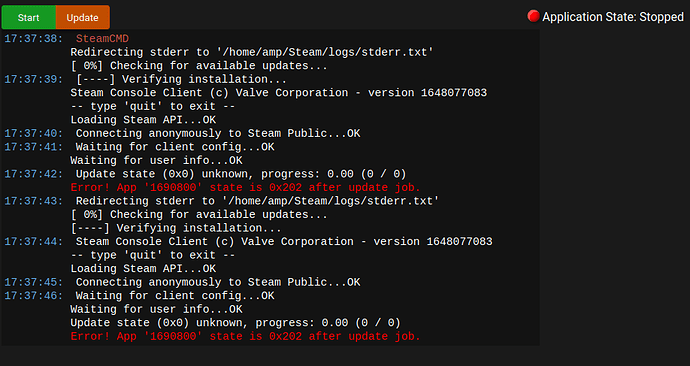 I’ve restarted AMP, deleted and remade the Satisfactory Instance, and just can’t figure it out. Any help would be appreciated.

I’d have attached multiple screenshots, but new users are limited.

Edit: Gparted is telling me that I have just under 3gb of disk space remaining. Perhaps that’s preventing an update somehow? I’m investigating, and will update this if disk space proves to be the issue.

Edit 2: It does seem to have been a disk space issue. After allocating more disk and expanding the volume, the update ran.

I’m leaving this post up in case someone else could learn from it. It was obviously an issue on my end, but the Instance screen that said “running” was misleading and fed my confusion.

Just so it can be marked as answered: Update state 0x202 means insufficient disk space.